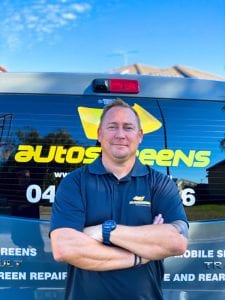 Jason Squire started Autoscreens in 2010 on the back of over 20 years’ experience in the automotive industry in the UK and Australia.

Under his leadership, Autoscreens has grown into an established leader in windscreen replacements and autoglass repairs in Perth with a strong reputation for quality and service excellence.

Jason grew up in the UK and started his long career in the automotive industry there with an apprenticeship in vehicle bodybuilding and a specialisation in vehicle conversions.

He followed that up with several additional professional qualifications, including a Grade A Vehicle Body Building Certificate from the Road Transport Industry, a GQA level 2 in NVQ Automotive Glazing and a Level 2 qualification in Joining Materials by Welding from the UK Engineer Training Authority.

During his studies, Jason was also a part-time volunteer in the Royals signals with the Reserve Territorial Army. Between 1991 and 1995, Jason completed his Phase One Signallers Course with the Royal Armoured Corps and was awarded a Certificate of Trade Proficiency as a Territorial Army Driver Electrician Class 3.  Training exercises took him all over Europe. He also represented the Signals in Rugby.

In 1999, Jason left the armed forces to join RAC Auto Windscreens. His skillset enabled him to fast-track his career to base supervisor and lead technician working with premiere dealerships in Crewe, Cheshire.

He also continued to volunteer in a number of different areas, including as a first responder with the West Midlands Ambulance Service and a scout leader with the Scout Association.

He relocated to Australia in 2008 with his young family, and spent his first two years down under as a head technician for a national windscreen company.

However, with all his experience, extensive qualifications and his abiding passion for the automotive industry, it was inevitable that he would start his own company and make his mark as an industry leader.

He started Autoscreens in 2010 and has grown the business into the leading windscreen repair and replacement company in Perth, servicing both domestic and commercial customers.

It’s a family-owned and operated business with Jason’s wife Dawn behind the scenes as the office manager and their son Xavier now out as an additional qualified technician in his own van.  Customers have the peace of mind that they are dealing with people who have a vested interest in the success of the business – and with Jason’s vast and varied experience, knowledge and expertise, Autoscreens is set to further entrench its position as Perth’s preferred windscreen repair and replacement company.

For more information about how Autoscreens can help with your next windscreen replacement, contact them today on 0400 200 086 or to stay up to date with what is happening at Autoscreens, follow them on Facebook or Instagram.